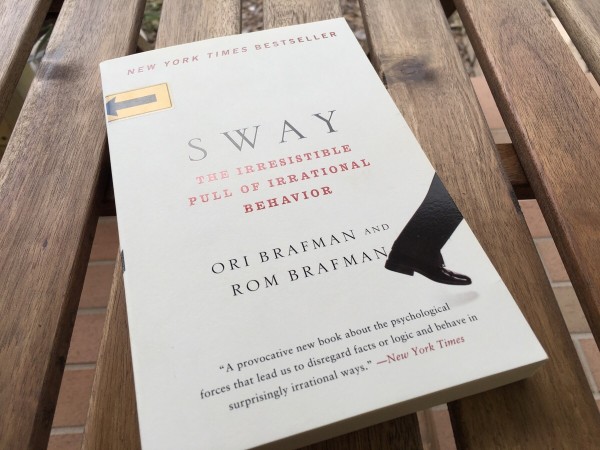 Three concepts that are discussed in the book Sway are loss aversion, value attribution, and diagnostic bias. Here is a overview of each of those topics.

In simple terms, loss aversion means that we naturally try to reduce our losses even if it means sticking with something when it would be best to not to.

People cringe at the thought of experiencing a loss. Have you ever rented a car before? Was the person helping you kind enough to recommend getting rental insurance for the car? Did you start to worry about a possible disaster like someone crashing into you or even worst, the car being totaled and you being stuck with a massive bill?

However, it turns out that your credit card may offer complimentary rental car insurance as a benefit of being a cardholder.

When I first read this, I grabbed my wallet and looked at my credit card and then called my credit card company to ask about benefits. It turns out that my card includes rental car insurance for being a member. So the next time that you are getting ready to travel, check with your credit card company to see the available perks of being a member. Then you can politely decline the rental car insurance with a thanks, but no thanks and a smile!

With value attribution, we set certain qualities about an object or a person through our initial perceived value.

Joshua Bell is an American violinist that shares his music with people all over the world. From Fredericksburg, Virginia to Shanghai, China to Sofia, Bulgaria — Joshua is easily able to sell out his concert performances.

In January of 2007, Joshua went to the L’Enfant Plaza subway station in Washington, D.C. in the morning during rush hour. He appeared to be just an ordinary person dressed in comfortable clothes and started playing his Stradivarius violin (valued at north of 3.5 million dollars). Here is what happened next.

For over 40 minutes, Joshua played his violin and over one thousand people walked by. Yet hardly anyone stopped and noticed.

One man listened for a few minutes, a couple kids stared, and one woman, who happened to recognize the violinist, gaped in disbelief.

So what happened here? Here was an exceptional violist that plays to sold out crowds all across the world and yet only few people noticed. He was not wearing formal attire and just appeared like a regular street performer. He definitely did not sound like an average violinist but he did appear as one. The commuters that passed by simply saw an average person and therefore perceived the quality of the performance as average and instead of hearing an amazing concert, then heard just street music.

When diagnosis bias occurs, we become blind to information that contradicts our initial views about a situation or a person.

In South Africa, a consumer lending bank worked with a team of economists to push personal loans to 50,000 of its customers. Different versions of the loan offer letter were created and randomly mailed off to the recipients. There was also no indication that the offer letters were part of the experiment. Here are some of the differences between the offer letters:

With something like a loan, you would believe that customers would be objective in reviewing the offer. Therefore, marketing tactics such as smiling photos, a chance to win a cell phone, or a competitor comparison should not matter.

Something interesting happened with the loan offer letters that had a smiling face included.

Men who received an offer letter of a smiling woman were much more likely to apply for the loan than were the men that received a picture of a smiling man. A smile is a smile, right? According to the study, the effect was pretty significant and having a photo of a beautiful woman on a letter does not make a better financial offer, but the researchers thought that the men were attracted to the woman shown in the loan offer letter and that is why they applied for the loan.

It does not seem rational that any man would sign up for a higher-interest loan because the offer letter had a photo of an attractive woman. Yet the men that applied made diagnostic errors because they were unconsciously focused on the woman and did not consider the important data such as is this loan rate competitive to what I can receive from another local bank?

Wake up early to create the mornings that you have always wanted and see amazing things happen in other areas of your life. Learn more about Lorenzo.